Here you can find the innovative initiatives that have been accompanied during the development of the project. These initiatives have been identified and selected through a democratic and fair procedure implemented in a previous stage of the project. A key selection criterion was the possibility of the initiative coming to fruition, and thus generating a greater potential for replicability, and consequently being able to promote the use of agrobiomass in the heating and thermal sector.

The selected initiatives try to cover a wide spectrum of innovations, and consist of different innovations and support actions, such as installation of boilers, development of logistic and supply chains, building of facilities or processing operations.

In THIS REPORT you can find a full description of all the cases shown below.

The icebreaker initiative is located in Istrian County, near the city of Pula. Its goal is to build an olive oil by-product press thus minimizing the management problem of these by-products. This solution also allows to produce agrobiopellets. Their final product, HDPS – Hydraulic Drying Press System – can be used as a main resource for sustainable energy production. The company started the construction of the site in September 2021. The realization of the pellet plant is planned for the end of June 2022.

During the construction, and since the techno-financial plan is already developed by the company, ZEZ is helping initiative via social and promotional support such as promoting the project (fairs, TV shows, interviews, promo materials, promotion video, etc.), help engaging and identifying potential new end-users and new financial schemes. 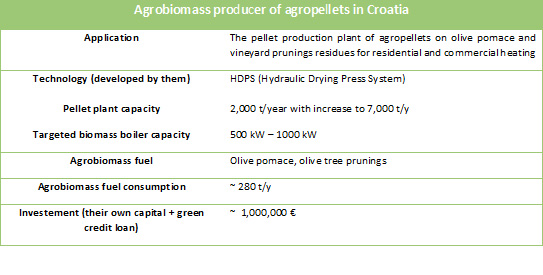 This project can influence its area by demonstrating the usage of alternative biomass in an existing facility. The Ecole des Roches site is used on a daily basis by more than 600 students, and includes a swimming pools and several housing buildings.

The agrobiomass used is a mix of pruning wood, stump wood and local forestry woodchips. It is relevant because it is locally produced, within 20 km from the facility.

Benefits obtained by the project beneficiaries by the use of the agrobiomass are:

The initiative supported in Greece links two local actors in the Naoussa wine growing area of Northern Greece: the local municipal authorities and the VAENI agricultural cooperative. The core concept revolves around the valorisation of a locally produced agricultural residue – vineyard prunings – and its transformation from a “waste” that the farmers want to dispose quickly to a valuable renewable energy resource.

Initial investigations about the bioenergy potential of vineyard prunings in the Naoussa were implemented together with VAENI (video) in a previous EU funded project – uP_running. Through the actions of AgroBioHeat, the Greek partners CERTH and INASO-PASEGES aimed to support the development of a bioenergy value chain based on vineyard prunings and aiming to cover the heating demands of major local consumer: the Municipal Swimming Pool. With the conclusion of the project, specific proposals and recommendations for implementing the project were brought to the attention of the local stakeholders which, if implemented, can provide concrete economic and environmental benefits, while also serving as a pioneering example for imitation regarding agrobiomass valorisation in Greece and abroad.

Bretcu Commune is a commune in Covasna County in Romania close the Carpathian Mountain region.   The commune has submitted a project proposal for investment in POIM 6.1 public call, aiming the establishment of local agrobiomass supply value chain and construction of 2 agrobiomass based heating plants in Bretcu.

In the accompanying actions the icebreaker entity was involved in several actions, such as meeting with technology providers, agrobiomass producers but also with policy makers in order to develop a well-analysed and mature project for agrobiomass to energy. The municipality expressed its willingness to participate and be mentored in this path while many times new information and aspects were discovered which could be later on barrier or issue in the implementation phase. 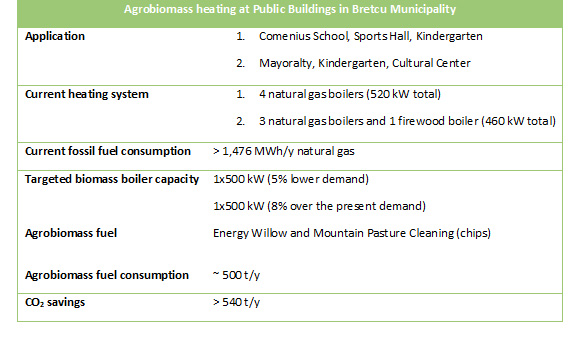 Solfarm Ltd is a private company dealing with production of potato, grain, corn and rapeseed. The company is located about 20 km to the north from Brasov and about 10 km from Sfantu Gheorghe town in Brasov Depression. The company owns a storage and packaging industrial hall up to 1000 sqm, where space heating is needed.

Sudanell is a locality in the province of Lerida, in Spain. One of their economic drivers is the agriculture, particularly fruit tree crops. Consequently, the amount of some agricultural by-products, such as agrarian pruning and plantation removal, are produced in great amounts after each season. A local pioneer (an agricultural service company of a self-employed person), who had to face this issue, aimed to valorise this by-product to energy. This was the starting point of this icebreaker initiative.

An agreement was reached between the local pioneer, a boiler manufacturer, an installer and a machinery manufacturer, after Expobiomasa Fair in Spain (September 2019) and meeting and conversations with AgroBioHeat to install a pilot boiler (75 kW) at the pioneer household.

This is the very first installation of this type in Spain. The boiler was installed at the beginning of 2020 and it is already in operation.

The Basque Land Energy Agency (EVE) is a public energy agency promoting a new pilot facility in Rioja Alavesa winemaking area (more than 13,500 ha of vineyards) which belongs to the Rioja PDO. EVE has performed steps on the study of feasibility and awareness raising already since 2018. Through AgroBioHeat the efforts have been placed to support technically EVE when establishing the pilot, initially for a district heating initiative, and finally at a winery to provide renewable heating. AgroBioHeat has assisted EVE and interacted with local actors especially in the issues related to logistics.

The accompaniment started already in 2019 with first contacts and the possibility to trigger new value chains of agricultural woody biomass in different areas of Spain. The objective has therefore been to bring support to Athisa Biogeneración, the main actor in this ice-breaker initiative, to create confidence and to engage actors, specially towards wineries in Rioja and Ribera del Duero PDO.

CITA is a research center for agri-food research, located in the central region of Teruel. Teruel is a quite unpopulated area with a quite high availability for agrobiomass. The accompaniment actions that have taken place with this initiative are related to the installation of a boiler that can supply heat and DHW to all the building, but with an additional added value: it is intended to be used as a test facility for the use of new local biomass and agrobiomass. So, the AgroBioHeat project have supported this initiative by providing technical support in the design of the boiler system, while promoting and giving visibility to the initiative in order to arouse interest and try to attract local stakeholders that may be interested in testing their local agrobiomass.

The icebreaking initiative of Dobrobud Ltd consists in the installation of biomass boilers with a total capacity of 500 kW for the heating of office buildings and warehouses in Kherson with local agrobiomass (reed, prunings and husks). Kherson region is located on the Northern Black Sea Coast where the reed is concentrated on a total area of about 80 thousand hectares. The economic energy potential of the reed is 58 ktoe in the region. Dobrobud Ltd has more than 7 years of experience in the production of briquettes, mainly from reed, sunflower husks, and woody biomass, including prunings. The company uses its machines for reed harvesting and biomass chippers. However, they don’t have the possibility of full operation due to the lack of permission for reed harvesting and need support to promote reed harvesting in the region. The main results of this icebreaking initiative accompaniment are providing a CATI survey for the understanding of the local perception of agrobiomass and enhancing the competitiveness position of the agrobiomass heating solutions; consultation workshop for sharing the experience of agrobiomass for heat projects; finding out rational technical and organizational solutions for the value-chain; mobilization of local stakeholders, suppliers, technology provider; development of business models; lobby and advocacy actions with local policy actors and promotional activities.

Bioterm-teplo Ltd supplies heat to two municipal hospitals and has a proposition to heat 7 schools in Odesa. These schools have decentralized boiler houses with old coal-fired boilers. The company is going to install modern biomass boilers there. The planned agrobiomass is sunflower husk pellets. The proposed icebreaking initiative is the installation of a biomass boiler with a capacity of 500 kW in Odesa school #11. The icebreaker needed a solution to provide effective combustion of sunflower husk pellets and necessary emission cleaning. The identified rational solutions for agrobiomass heating will be replicated in other schools. The main results of the icebreaking initiative Bioterm-teplo accompaniment are providing a CATI survey for the understanding of the local perception of agrobiomass and enhancing the competitiveness position of the agrobiomass heating solutions; consultation workshop for sharing the experience of agrobiomass for heat projects; finding out rational technical and organizational solutions for the value-chain; issues of biomass quality, efficiency, air quality, ash; engineering (automation of the boiler, emission cleaning system); mobilization of local stakeholders, suppliers, technology provider; lobby and advocacy actions with local policy actors and promotional activities.